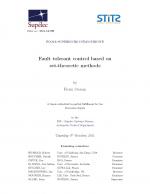 The scope of the thesis is the analysis and design of fault tolerant control (FTC) schemes through the use of set-theoretic methods. In the framework of multisensor schemes, the faults appearance and the modalities to accurately detect them are investigated as well as the design of control laws which assure the closed-loop stability. By using invariant/contractive sets to describe the residual signals, a fault detection and isolation (FDI) mechanism with reduced computational demands is implemented based on set-separation. A dual mechanism, implemented by a recovery block, which certificates previously fault-affected sensors is also studied. From a broader theoretical perspective, we point to the conditions which allow the inclusion of FDI objectives in the control law design. This leads to static feedback gains synthesis by means of numerically attractive optimization problems. Depending on the parameters selected for tuning, is shown that the FTC design can be completed by a reference governor or a predictive control scheme which adapts the state trajectory and the feedback control action in order to assure FDI. When necessary, the specific issues originated by the use of set-theoretic methods are detailed and various improvements are proposed towards: invariant set construction, mixed integer programming (MIP), stability for switched systems (dwell-time notions).